Restless legs syndrome (RLS) is characterized by unpleasant sensations in the legs and an urge to move them continuously in order to get relief. The disease generally presents with symptoms that are described in the following manner: Burning, creeping, tugging, or like insects crawling inside the legs. The sensations may be mild to quite painful.

For patients with severe symptoms, neurologists recommend decreased use of caffeine, alcohol, and tobacco and an increased ingestion of iron, folate, and magnesium. Taking a hot bath, massaging the legs, or using a heating pad or ice pack may also be helpful in relieving symptoms. In 2005, Ropinirol became the only drug approved by the U.S. Food and Drug Administration specifically for the treatment of moderate to severe restless legs syndrome.

There is no cure for RLS and its symptoms may last a lifetime. Symptoms tend to worsen with age though there may be periods of remission or a decrease in symptoms. Nevertheless, current therapies can control the disorder. 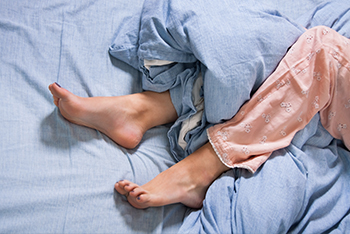